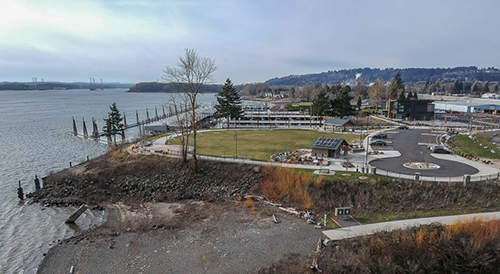 Need a local state certified siding contractor in Washougal Washington? Preferred Exteriors is the company to call. With 30 years proven experience servicing Washougal, Camas, and all Vancouver WA metro area you will see their professionalism from the beginning. The owner himself handles ALL inspections and bids cutting out the expensive middle man salesman saving you thousands of dollars.  They have also been awarded the coveted A+ rating with the Better Business Bureau for their expertise as a siding contractor and roofing company serving Camas and Washougal Washington.

In May of 1792 Captain Robert Gray, a Boston fur trader, entered the mouth of the Columbia River discovering Washougal.  Soon after a famous British explorer named George Vancouver traveled to the area to verify Grays discovery.  A lieutenant named William Broughton was sent to explore the waters of the Columbia River eastward landing in present day Washougal Washington.

Seeing the beauty of the mountain range he named Mount Hood after a British admiral and Point Vancouver was named after his commanding officer.  18 years later the rest of the river east of  Washougal was properly charted by another famous British explored named David Thompson.

I have personally lived in this area for 30 years and have seen the growth with residential subdivisions popping up nestled in the beautiful evergreen trees.